Not for Retail distribution: this document is intended exclusively for Professional, Institutional, Qualified or Wholesale Investors / Clients, as defined by applicable local laws and regulation. Circulation must be restricted accordingly 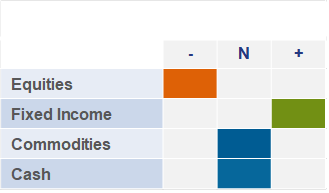 US monetary policy outlook appears increasingly  dependent on the medium-term outlook for US trade policy. We still expect negotiations to resume between the US and China after a meeting between their Presidents at the G20 summit on the 28-29th of June, despite recent hawkish rhetoric. However, the US is likely to continue to provoke further trade tensions over the coming 18 months with China, Europe and beyond, as part of the Trump’s political strategy. Given this uncertainty, it is not surprising that the Fed is providing no suggestion of an immediate cut ahead of its June meeting. Rather, Fed speakers and Fed Chair Jerome Powell stated that the Fed was monitoring trade developments very closely and would “act as appropriate to sustain the expansion”. We therefore expect the Fed to react to trade developments if necessary.

Markets have gone much further. The magnitude of rate cuts expected over the next 18 months is now quite aggressive and ranges from around 10bp for the ECB and 15bp for the Bank of England and Bank of Japan to around 50bp of rate cuts for Bank of Canada, the Reserve Bank of Australia and almost 100bp for the Fed, with nearly 3 cuts priced in by year-end. It is striking how the market backdrop has shifted from selective tightening to universal easing.

So much so that markets now strongly expect the Fed to cut interest rates as soon as July. Over the last 30 years the Fed has always cut when the market priced a cut on the day prior to a FOMC meeting. If the Fed does not intend to cut rates, it will have to drive market expectations for easing lower, and the previous instances suggest that equities and bonds react negatively as expectations for cuts moderate.

If the Fed does eventually cut rates, then history suggests that markets reaction will depend on the reason it is cutting rates.If the reason is weakening growth then this is not a good environment for equities overall (e.g. like in Jan 2001 or Sep 2007). If, on the other hand, the reason is to provide insurance against future downside risks even as the current growth backdrop remains resilient (e.g. like in Jul 1995 or Sep 1998), then these rate cuts would most likely bolster equity markets. Signs of a further deterioration of the global cycle are accumulating and the last employment report in the US, much weaker than expected, could be seen as another important signal in that direction.Therefore the margin of error for markets and the Fed appears now relatively narrow. In this context, we reiterate our preference for carry positions, essentially in High Yield credit and emerging debt, over equities. We don’t expect US Treasuries and the USD to move that much from current level given what is already priced-in. 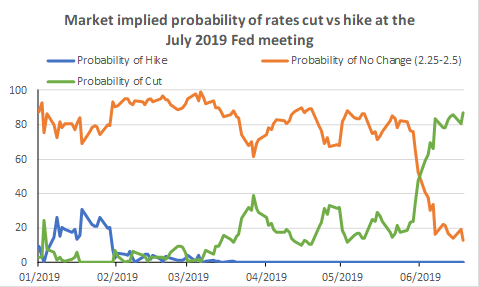 Be free to achieve the tomorrow you need

Not for Retail distribution: This document is intended exclusively for Professional, Institutional, Qualified or Wholesale Clients / Investors only, as defined by applicable local laws and regulation. Circulation must be restricted accordingly.

This communication is for professional clients only and must not be relied upon by retail clients. Circulation must be restricted accordingly. This communication does not constitute an offer to buy or sell any AXA Investment Managers group of companies’ (‘the Group’) product or service and should not be regarded as a solicitation, invitation or recommendation to enter into any investment transaction or any other form of planning. It is provided to you for information purposes only. The views expressed do not constitute investment advice, do not necessarily represent the views of any company within the Group and may be subject to change without notice. Whilst every care is taken, no representation or warranty (including liability towards third parties), express or implied, is made as to the accuracy, reliability or completeness of the information contained herein. Past performance is not a guide to future performance. The value of investments, and the income from them, can fall as well as rise and investors may not get back the amount originally invested. Due to this and the initial charge that is usually made, an investment is not usually suitable as a short term holding. Before making an investment, investors should read the relevant Prospectus and the Key Investor Information Document / scheme documents, which provide full product details including investment charges and risks. The information contained herein is not a substitute for those documents or for independent advice. Some of the investment vehicles mentioned may not be available in certain jurisdictions. Please check the countries in which they are registered with the asset manager. AXA INVESTMENT MANAGERS PARIS, a company incorporated under the laws of France, having its registered office located at 6, Place de la Pyramide 92908 Paris – La Défense cedex – France, a “société anonyme” with capital of euros 1 384 380 registered with the Nanterre Trade and Companies Register under number 353 534 506, a Portfolio Management Company, holder of AMF approval no. GP92008, issued on 7 April 1992.