The asset class is always prepared for a crisis, but the uneven impact of the virus means fundamental credit analysis is more important than ever.

As the COVID-19 pandemic cast its shadow over our economies, the high yield debt market has seen considerable changes of its own – not least the glut of downgrades bringing formerly investment grade (IG) issuers into the sector. However, this presents signs of resilience and opportunities for investors.

Two fundamental aspects of the high yield (HY) market have given issuers a chance to weather the storm. First, HY companies tend to ‘term-out’ debt – habitually moving shorter-term arrangements to longer-term. Second, firms typically have a degree of flexibility from revolving credit facilities (RCFs) which allow them to access cash, up to a predetermined limit, at any time. In short, there is no widespread and sudden refinancing requirement on the horizon. In a sector used to stressful conditions, the wiggle room is already incorporated.

That said, damage is inevitable. The hard stop in parts of the economy has seen activity slump – in some cases to near-zero and for month after month. It has been dramatic for retailers, restaurants, airlines and many more. In high yield, the energy sector, and particularly US oil, has taken some of the hardest hits.

Spreads have narrowed from their peak, but remain well above pre-crisis levels, which we think offers good value for UK insurers and pension schemes. As of 22 July, spreads in Europe were 483 basis points (bps), compared to 533bps in the US and 559bps globally[1]. This is tighter than the peak in March (by 383bps, 554bps and 535bps respectively) but still about 200bps wider than the start of the year. US issues still dominate – accounting for more than half of the global high yield market. For UK and European investors looking to access the US market, it is worth noting that hedging costs (see Figure 1) have tumbled. After historical highs in late 2018, effective zero rates from the Federal Reserve mean currency hedging costs are now at lows not seen since 2015.

The spreads we have seen are almost equivalent to the tech crash in 2002. The only period with dramatically wider spreads was the global financial crisis where they briefly hit 2,000bps in US HY (see Figure 2). We believe that the swift action and the sheer scale of monetary and fiscal policy announced to combat the coronavirus around the world – and the willingness to do more in future – has helped to avoid this outcome. 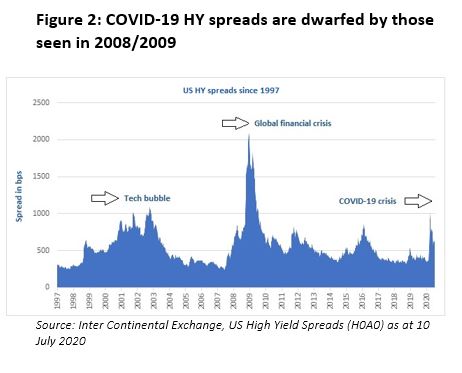 Defaults will rise in the global HY space. We think a first wave will continue over the next few months, with a second possible as we move through 2021, when the effect of stimulus and intervention wanes, and when the true impact of the outbreak is more clear. This doesn’t rob the HY sector of its appeal, but it does mean that care is needed when taking advantage of these market conditions. We expect an overall default rate of 5-8% in US HY this year.

The demand picture in HY has been a curious beast, with liquidity holding up well at the more distressed end of the market, and among issuers who were well shielded from the virus impact or which even have a positive crisis story to tell (such as in healthcare). In the latter group, some companies are trading not far below where they traded before, but there may well be reasonable value here as the default risk remains low.

In the middle group, however, where visibility about prospects is relatively low, liquidity has been weaker and prices suffered early in the crisis. That means the potential for both risk and value is perhaps highest here, in our view. And it is here, too, that good credit analysis will be able to add the most value, although it may take time to position portfolios.

Within these groups, across sectors and within sectors the effects of the pandemic have been uneven. Balance sheet liquidity has always been a key part of our credit research tools, but it is particularly relevant now to determine which individual companies may have trouble bridging to the other side of this crisis in both a base case and a more stressed case where lockdowns persist or return. We have been reviewing individual holdings for short-term liquidity needs in both scenarios, while our analysis is adapting daily to factor in the unique characteristics of national intervention and support measures.

This issuer-by-issuer approach applies equally to the influx of so-called fallen angels from the IG segment into HY – the dollar volume of fallen angels hit a record $91.5bn in March. This ongoing effect of the crisis is having a material impact on the size and structure of the HY market and will bring buying opportunities as the market adapts. We believe there should be no blind rush to snap up fallen angels, especially in weaker sectors. Value is possible because there may be forced sellers and the companies concerned may be larger and more resilient. However, fundamental analysis and valuation remains the starting point for any individual trade.

In an unprecedented crisis, barely a decade from the last one, markets have rightly been rattled. But as volatility softens, attention should turn to the value on offer. We can see good reason to increase duration and risk positioning, where appropriate, while controlling risk for more stressed situations that may arise. History suggests that entry into the HY market at these sorts of spreads has a good probability of a strong return over a one-year view providing good opportunites for investors.

Find out more about a style of investment that has traditionally been associated with helping to mitigate against capital loss.

Not for Retail distribution: This document is intended exclusively for Professional, Institutional, Qualified or Wholesale Clients / Investors only, as defined by applicable local laws and regulation. Circulation must be restricted accordingly.

This document is for informational purposes only and does not constitute investment research or financial analysis relating to transactions in financial instruments as per MIF Directive (2014/65/EU), nor does it constitute on the part of AXA Investment Managers or its affiliated companies an offer to buy or sell any investments, products or services, and should not be considered as solicitation or investment, legal or tax advice, a recommendation for an investment strategy or a personalised recommendation to buy or sell securities.

It has been established on the basis of data, projections, forecasts, anticipations and hypothesis which are subjective. Its analysis and conclusions are the expression of an opinion, based on available data at a specific date.

All information in this document is established on data made public by official providers of economic and market statistics. AXA Investment Managers disclaims any and all liability relating to a decision based on or for reliance on this document. All exhibits included in this document, unless stated otherwise, are as of the publication date of this document.

Furthermore, due to the subjective nature of these opinions and analysis, these data, projections, forecasts, anticipations, hypothesis, etc. are not necessary used or followed by AXA IM’s portfolio management teams or its affiliates, who may act based on their own opinions.